With summer finally here, I think we all need a very cute book. Or a pick-me-up book when you’re feeling down. A book that will make you smile-well, you get my point, so I might as well stop there and tell you this: this was my first Kasie West book, and it definitely won’t be the last because CUTENESS everywhere..

A RICH BOY, A SHOP OF PORCELAIN DOLLS AND A BIT OF LOVE

“ Growing up, I never felt deprived. I was always happy. It seems only lately I’ve started seeing everything I didn’t have.”

In The Distance Between Us, we follow 17-years-old Caymen as she’s struggling to figure out who she wants to be, and what she wants to do with her life. Living with her mother above the doll store they own, she spends her time between school and working at the store, basically spending all her time there to help her mother through rough finances and hoping for a better day where she doesn’t have to stare at dolls’ face all the time. Kind of creepy when I’m putting it like that, sorry, ahah. I think you can all see this coming, because this is a contemporary romance: cute guy enters, cute guy is loaded, and two worlds collide while she finds herself falling hard and fast for the guy she shouldn’t fall for. I think what surprised me, despite this whole predictability of the story, is how there was something MORE than just this romance between two characters, very Pride and Prejudice style. Because the story was also about Caymen and Xander –a.k.a very cute boy- figuring out what they want to do with their life once they graduate high school. There were family issues to deal with. Definitely more than just a fluffy contemporary, even if, well…it was very fluffy as well.

SARCASM AND A SLOW BURNING ROMANCE

“Note to self: Caymen is very good at sarcasm.”
“If you’re recording notes for an official record, I’d like the word ‘very’ stricken and replaced with ‘exceptionally.”

Caymen is a bottle full of sarcasm from page one to the very end of the book. I found her voice as the main character of the story very good, and real, she reminded me of those teenagers growing up too fast because of everything that’s happening around them and with their families. Worries about finances, about her mother’s shop, worries about her future and most of all, the future of her family, cripples the book and it definitely shows something deeper than the fluffy romance we think we’re going to get. She feels like a teenager, though, one with a lot on her back but one anyways, and that’s all because –thanks to Xander. Even if he, and their romance, was a little cliché, it built slowly during the whole story, from strangers to friends, to more than that, and I really loved seeing their feelings grow during the whole story. Plus, Xander was way too cute.

FINDING YOURSELF AND WHO YOU WANT TO BE.

“I wonder why some people seem to be born knowing what they want to do with their lives and others—mostly me—have no idea.”

More than just the average, slightly cliché romance I expected, The Distance Between Us gave me interesting characters, A LOT of sarcasm and lots of family moments as well. Caymen is only living with her mother, and there are lots she doesn’t know about her family, both from her dad’s and mom’s side. Without getting to much into it, it was great to see all of the struggles she could encounter, and the questions she constantly asked herself about this part of her she didn’t know. Because as a teenager, there’s a lot you’re trying to figure out, and that was an issue all thorough the story, with this family aspect, AND with the whole “what am I going to do once high school is over” aspect, as well. I think this book managed to handle these issues pretty well, and allows us to think that, it’s okay not to have it all figured out, because someday, you will know what’s right for you.

The Distance Between Us is perfect for marshmallows just like me, lovers of YA contemporary and just mostly everyone looking for a fast read under the sunshine. Or on a rainy day, it’s as you wish. What matters here is that Kasie West delivers a CUTE, cute, very cute book that’ll make you smile like an idiot most of the time. And who doesn’t love that?

Did you read The Distance Between US? Did you enjoy it? Do you want to read it?

If you’ve read some Kasie West before, which book of hers is your favorite? And if now, what authors would you recommend for the summer? Share your thoughts in comments!

Kasie West, The Distance Between Us,  Published by Harper Teen, July 2nd 2013. 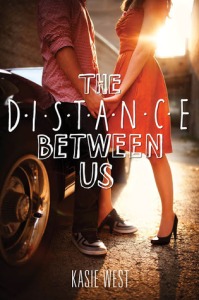 Seventeen-year-old Caymen Meyers studies the rich like her own personal science experiment, and after years of observation she’s pretty sure they’re only good for one thing—spending money on useless stuff, like the porcelain dolls in her mother’s shop.

So when Xander Spence walks into the store to pick up a doll for his grandmother, it only takes one glance for Caymen to figure out he’s oozing rich. Despite his charming ways and that he’s one of the first people who actually gets her, she’s smart enough to know his interest won’t last. Because if there’s one thing she’s learned from her mother’s warnings, it’s that the rich have a short attention span. But Xander keeps coming around, despite her best efforts to scare him off. And much to her dismay, she’s beginning to enjoy his company.

She knows her mom can’t find out—she wouldn’t approve. She’d much rather Caymen hang out with the local rocker who hasn’t been raised by money. But just when Xander’s attention and loyalty are about to convince Caymen that being rich isn’t a character flaw, she finds out that money is a much bigger part of their relationship than she’d ever realized. And that Xander’s not the only one she should’ve been worried about.

58 thoughts on “Review: The Distance Between Us, Kasie West”