A couple of years ago – I can’t actually remember when, that’s a shame, but I found out about Alice Oseman’s first book, Solitaire. And I read, and loved it, because it had one of these qualities I love about contemporary stories: it felt real. I found that feeling again in Radio Silence, and it was even better.

Really, this is something I love about this young writer – well, not too young, but she’s younger than me anyway. Maybe it’s because of that, maybe it’s because I feel like a lot of the feelings put into her books are from her actual experience – I know she didn’t like her university experience, a lot of things in this book and the portrayal are probably from there. I don’t really know how she does it. Her writing style isn’t that one of a kind, weird or completely out of the blue prose that you’ll fall in love with. It’s simple, but not too simple. It’s filled with humor, pop culture references you’ll get and that aren’t just put there for the sake of it, they make the story whole, real, actual, and completely accurate. Most of it all, the writing just rings true, and perfectly creates a world, a universe, and a set of characters completely believable that you’ll end up rooting for.

“Everyone’s different inside their head.”

We are living with the internet, we are living with music, Youtube shows, online shopping, Facebook messaging and so on. In Radio Silence, just like in her first book, the author puts her character there. Exactly where we are living, and making them alive in this world we know so well, surrounded by passions, thoughts, desires, lives’ expectations and, deep inside, our own. I’m not in the main character’s place, because I’m not going to university, I am done with it. But Alice raises such interesting questions, such as what you’re supposed to do with your life, what’s expected of you when you’re actually good in class, what you really want. Frances is the main character in this book, and she’s supposed to be this nerd, know-it-all, future Cambridge student. But she wasn’t just that. She’s a passionate artist, a huge fan of a Youtube show. She felt real, and so did her inside struggles at finding who she is, and what he wants to be.

“He smiled and looked away. ‘Sometimes I think we’re the same person…but we just got accidentally split into two before we were born.”

On the other side of the equation, we have Aled, he’s a freshman and he’s having a hard time at university. He lives right across the street. He’s the creator of a Youtube show. And a friendship begin between the two of them, genuine, built by Facebook messages, impromptu midnight revision times and fangirling over a Youtube show. Just like real friendships do. Very quickly I found myself caring for their friendship, loving all of their scenes together, and rooting for them, not as a couple, or at a tiny eventual tension between them, or a little sparkle that could eventually become the beginning of more than a friendship. Because there is NO romance in this book, and nothing happens, nothing ever goes towards that path, and I loved this. It was such a great change from all of the contemporaries, and even if I do love my little marshmallow story, once in a while, it feels great to actually root for a friendship, and only a friendship. Nothing more to see here.

“You’re an idiot,’ said Mum, when I relayed to her the entire situation on Wednesday. ‘Not an unintelligent idiot, but a sort of naive idiot who manages to fall into a difficult situation and then can’t get out out of it because she’s too awkward.”

In addition to shaping her main characters pretty well – flawed, yet believable, kind of annoying at times, but completely worth rooting for, the author did a great job at making side characters great side kicks to the story, both in the good, and the bad way. Frances’ “friends” at school weren’t shaped, oddly enough, to help us understand the falseness of this friendship, however one of them, Raine, stood out, made a difference, and as the story went on, jumped out of the page with her quirks. Daniel, Aled’s best friend, slowly showed his flaws and became a character we grow to like, especially towards the end. And honorable mention for Frances’ mother. Unicorn onesies, great movie nights, and a real supportive parental figure in a contemporary. Yay!

Once again, Alice Oseman convinced me that she’s an author to look out for. Promising with her debut, Solitaire, she impressed me even more with Radio Silence, with themes and choices we have to make, characters we can relate to, a solid friendship, a kind of inspiring Youtube show and overall, incredible characters shaping this story into a great contemporary.

Did you read Radio Silence? Did you enjoy it? Do you want to read it? Share your thoughts in comments! 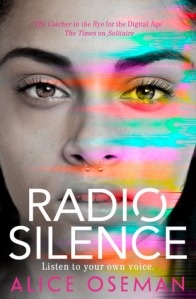 What if everything you set yourself up to be was wrong?

Frances has always been a study machine with one goal, elite university. Nothing will stand in her way; not friends, not a guilty secret – not even the person she is on the inside.

But when Frances meets Aled, the shy genius behind her favourite podcast, she discovers a new freedom. He unlocks the door to Real Frances and for the first time she experiences true friendship, unafraid to be herself. Then the podcast goes viral and the fragile trust between them is broken.

Caught between who she was and who she longs to be, Frances’ dreams come crashing down. Suffocating with guilt, she knows that she has to confront her past…
She has to confess why Carys disappeared…

Meanwhile at uni, Aled is alone, fighting even darker secrets.

Frances is going to need every bit of courage she has.