Vendetta is one of those books I had on my radar for a while, now. After finally reading it, I can say I’m not disappointed : filled with twists and turns and various characters, this compelling story had me hooked from the first pages.

“Imagine if we had no secrets, no respite from the truth. What if everything was laid bare the moment we introduced ourselves?”

Sophie Gracewell lives with her mom in the suburbs of Chicago, works at her father’s diner with her best friend. But what seems to be an average, teenager girl life, isn’t, at all. When five boys move into her neighbourhood, Sophie finds herself drawn to Nico, one of the boys. But why did they move to the abandoned mansion, and why is her uncle urging her not to talk to them? Behind closed doors and smiles, there are so many secrets you can keep, until they’re spilled out, and they can ruin lives, shed some tears…and some blood, at the same time…. I have to say, one of the first thing that drawed me to this book, was the synopsis. So mysterious, so intriguing, even though it seemed to me, at first, like the average teen romance. Weird boy moving to town, girl getting a crush on the boy, discovering he’s a vampire/werewolf/magical spirit of some kind… This isn’t the first story starting like that. Sure. But, let me tell you, it’s a story that is different from the others. Don’t let yourself be fooled by a look-alike synopsis. Nothing, really, nothing is at it seems in Vendetta, and, no one is, either.

What I found really appealing in this story, were the characters. I’m going to start with the five mysterious boys. If they seemed to be alike, physically, when I first started reading, I quickly realized how well each of them were thought : they all had their own personality and characteristics, which made this book really interesting to read. I would have liked to know more details about all the boys, but, as Nic and Luca are the two main focus on this book, it was okay, I guess. Both of them were well developed for me : I understood their struggles, and I especially enjoyed the fact that Luca was so, unreachable. I had a hard time understanding his motives, and that’s one of the point that made me keep on reading. If I have to say one word about the main character, Sophie, it would be, real. She seemed like a real teenager. Sure, some of her decisions bothered me, she acted dumb from time to time, but she was sarcastic, she was really easy to read, and to relate to.

“It was an uncomfortable feeling, staring into the darkest moments of someone’s soul without them knowing.”

The relationships between the characters were interesting to follow, but I have to say, at first, it seemed a little bit like insta-love. I felt bothered to see how fast her crush was developping during the first chapters of the book. However, I have to say, it was well-balanced during the rest of the story : as Sophie uncovers, part by part, the mystery behind Nic and his family, her feelings get a little unstable. I like the way she reacted to the revelations, it didn’t seem weird or confusing, it seemed very real, to me. I loved the drama between Sophie and Luca : as I said before, he’s an unpredictable character, and I enjoyed all of their altercations, a lot. They have chemistry, I believe, and I’m looking forward to read more about them! Millie, was a good character, too. She gave up everything to keep on being Sophie’s best friend, despite everything that happened in the past, and I admire that, a lot. Great, strong friendships like that are refreshing to read. I wish we had more of that, though, but I realize that’s not the main focus of the story.

If you pick up Vendetta, you’re in for quite a ride. It’s like watching the kind of tv show you really love : you know, most of the time, what’s going to happen, but you don’t enjoy it any less. And, sometime, especially at the end of the episodes, you’re so dragged into the story that you don’t see it coming. The plot twists, the big action coming, the discoveries and mysteries are uncovered. You’re surprised, you’re caring about the characters and what will happen next.

Vendetta is a perfect read for anyone who likes a good romance, obviously, but not an ordinary one. It’s filled with twists and turns, it’s unpredictable when you think it will be predictable, and it’s dark in a way so many others YA romance aren’t. I can’t wait to see what happens next.

Did you read Vendetta? What did you think about it? If not, are you planning to read it?  Feel free to share your thoughts in comments! 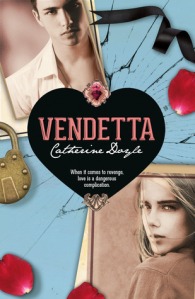 When it comes to revenge, love is a dangerous complication.With a fierce rivalry raging between two warring families, falling in love is the deadliest thing Sophie could do. An epic debut set outside modern-day Chicago.

When five brothers move into the abandoned mansion in her neighbourhood, Sophie Gracewell’s life changes forever. Irresistibly drawn to bad boy Nicoli, Sophie finds herself falling into a criminal underworld governed by powerful families. As the boys’ dark secrets begin to come to light, Sophie is confronted with stinging truths about her own family, too. She must choose between two warring dynasties – the one she was born into, and the one she is falling in love with. When she does, blood will spill and hearts will break.