Hi friends! Today I’m very excited to be reviewing a book I’ve been wanting to read for, well, AGES. Shout out to my sister for gifting me this book, probably very tired from all the screaming I did about wanting to read it. I was right to, though, I really loved it!

Also shout out to Laura, her love for the book and the series made me want to read it all the more! 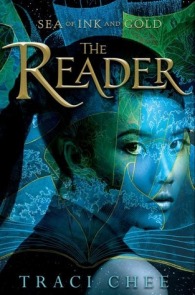 Sefia knows what it means to survive. After her father is brutally murdered, she flees into the wilderness with her aunt Nin, who teaches her to hunt, track, and steal. But when Nin is kidnapped, leaving Sefia completely alone, none of her survival skills can help her discover where Nin’s been taken, or if she’s even alive. The only clue to both her aunt’s disappearance and her father’s murder is the odd rectangular object her father left behind, an object she comes to realize is a book–a marvelous item unheard of in her otherwise illiterate society. With the help of this book, and the aid of a mysterious stranger with dark secrets of his own, Sefia sets out to rescue her aunt and find out what really happened the day her father was killed–and punish the people responsible.

I HAD A HARD TIME WITH…💔

The Reader definitely is a book worth way more hype than it’s getting. With such an incredible, intriguing and complex world-building and magic system, a storytelling that is so wonderful, gorgeous writing and hello, amazing characters you can’t help but root for, I’d 200% recommend it to anyone looking for a great fantasy. I’m going to be reading the rest of this series soon, that’s for sure.

Trigger warnings: Blood, murder, death of a parent, death of a loved one, PTSD, panic attacks.

Diversity: the entire book has a racially diverse cast of characters with POC and Sefia, the main character, has East Asian features.

Do you want to read The Reader? Did you read it?

Do you have any recommendations of books featuring great friendships? I’d love to hear them! Let me know in comments!